What are the main processes of the laser cutting machine

1. Vaporization cutting. In the process of laser vapori […]

1. Vaporization cutting.
In the process of laser vaporization cutting, the surface temperature of the material rises to the boiling point temperature so fast enough to avoid melting caused by heat conduction, so part of the material vaporizes into steam and disappears, and part of the material is ejected from the bottom of the slit by the auxiliary gas Flow blows away. Very high laser powers are required in this case.
To prevent material vapor from condensing on the kerf wall, the thickness of the material must not greatly exceed the diameter of the laser beam. This process is therefore only suitable for applications where the exclusion of molten material must be avoided. This machining is really only used in very small areas of use for iron-based alloys.
This process cannot be used, such as wood and certain ceramics, which are not in a molten state and therefore less likely to recondense the material's vapors. In addition, these materials typically achieve thicker cuts. In laser gasification cutting, optimal beam focusing depends on material thickness and beam quality. The laser power and the heat of vaporization have only a certain influence on the optimal focus position. In the case of a certain thickness of the plate, the maximum cutting speed is inversely proportional to the gasification temperature of the material. The required laser power density is greater than 108W/cm2 and depends on the material, depth of cut, and beam focus position. In the case of a certain thickness of the sheet, assuming sufficient laser power, the maximum cutting speed is limited by the velocity of the gas jet.

2. Melting and cutting.
In laser melting cutting, the workpiece is partially melted and then the melted material is ejected by means of airflow. Because the transfer of the material occurs only in its liquid state, the process is called laser melting cutting.
The laser beam coupled with a high-purity inert cutting gas pushes the molten material out of the kerf without the gas itself cutting. Laser fusion cutting can achieve higher cutting speeds than gaseous cutting. The energy required for gasification is usually higher than the energy required to melt the material. In laser melting cutting, the laser beam is only partially absorbed. The maximum cutting speed increases with increasing laser power and decreases almost inversely with increasing sheet thickness and material melting temperature. In the case of certain laser power, the limiting factor is the gas pressure at the kerf and the thermal conductivity of the material. Laser fusion cutting can produce oxide-free cuts for iron and titanium. The laser power density that produces melting but not gasification is between 104W/cm2 and 105W/cm2 for steel materials.

3. Oxidation melting cutting (laser flame cutting).
Fusion cutting generally uses inert gas. If oxygen or other active gas is used instead, the material will be ignited under the irradiation of the laser beam, and a violent chemical reaction with oxygen will generate another heat source to further heat the material, which is called oxidative melting cutting.
Due to this effect, for the same thickness of structural steel, higher cutting rates can be obtained with this method than fusion cutting. On the other hand, this method may have a poorer cut quality than fusion cutting. In practice, it produces wider kerfs, noticeable roughness, increased heat-affected zone, and poorer edge quality. Laser flame cutting is not good for precision models and sharp corners (risk of burning the sharp corners). Thermal effects can be limited using a pulsed-mode laser, where the power of the laser determines the cutting speed. At a given laser power, the limiting factors are the supply of oxygen and the thermal conductivity of the material.

4. Control fracture cutting.
For brittle materials that are easily damaged by heat, high-speed and controllable cutting by laser beam heating is called controlled fracture cutting. The main content of this cutting process is that the laser beam heats a small area of ​​brittle material, causing large thermal gradients and severe mechanical deformation in this area, resulting in the formation of cracks in the material. The laser beam can direct cracks in any desired direction as long as a uniform heating gradient is maintained. 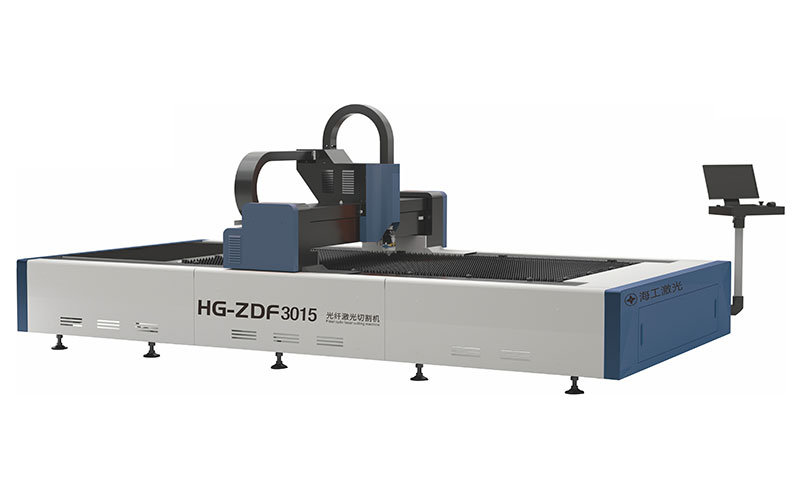